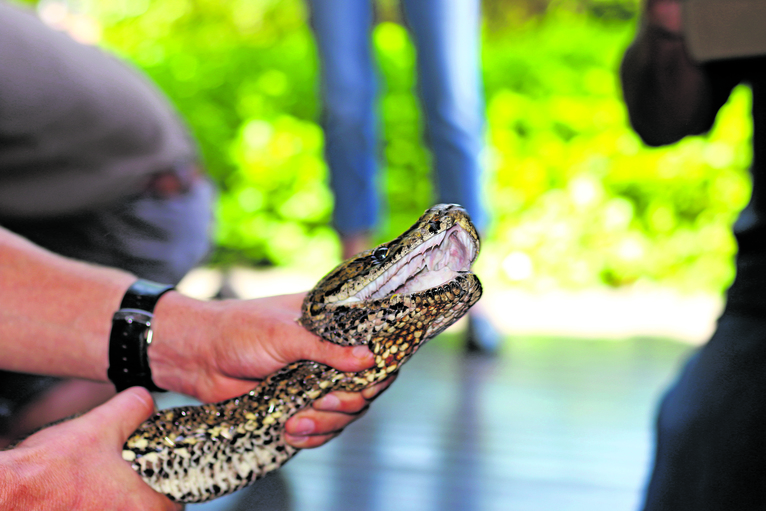 In what may very well be a first for the province, a 4m-long African Rock python has been microchipped at Zimbali as part of a research project.

The female snake’s fifty-eight eggs are in incubation at Crocworld Conservation centre on the South Coast after the gravid python laid her eggs at the centre, following her capture at Zimbali last December.

Nick Evans, followed by Crocworld Conservation’s general manager Martin Rodrigues and herpetologist, James Wittstock headed for Zimbali on Monday where the group saw to the micro-chipping of the python which was later released back into her habitat off the fifth hole of the Zimbali golf course.

Last December, Nick Evans and others battled for six hours to capture the reptile while also fending off an attack from bees after their hive was disturbed.

The python was temporarily relocated to the Crocworld Conservation centre until she had laid her eggs – two rounds of birthing later, a total of 58 eggs laid.

These, according to Wittstock will take roughly another month and a week before they hatch.

Zimbali environmental manager Brendan Smith said the micro-chipping forms part of a research project between the estate and the KwaZulu-Natal Amphibian and Reptile Conservation group.

“We would like to monitor the python’s movements and determine if it may in fact be the same one captured and released earlier last year,” said Smith.

“Usually we do not remove snakes from the estate, however being that she was gravid we saw it necessary to see her safely through to term.”

Rodrigues and Wittstock said that after her eggs had successfully hatched and the offspring completed their first shed, the 58 baby pythons would join their mother at Zimbali.

Although baby pythons can live off the yolk of the eggs they hatched from for a few weeks, Wittstock said at two weeks old they would lunge at passing prey.

Although research has previously indicated that pythons have no maternal instincts directly after their eggs had hatched, recent research in a study conducted by Professor Graham Alexander of Wits University, who is considered the leading authority on reptiles in the country, found that python mothers stay with and care for their offspring for about two weeks before cutting them loose.