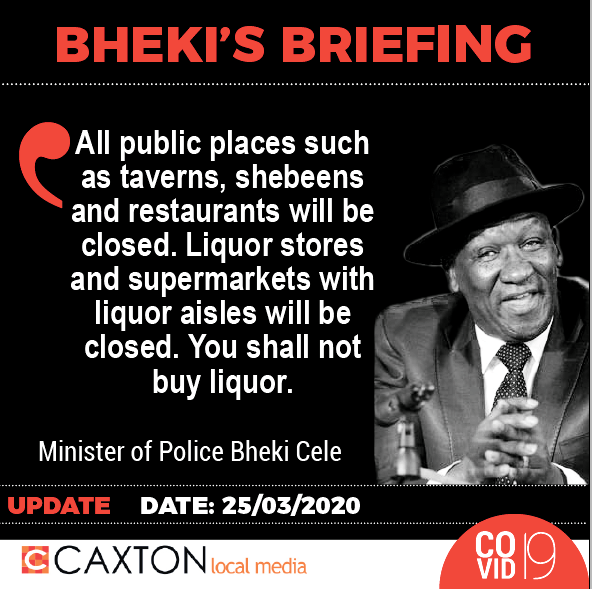 In a media briefing earlier this evening (25 March) the Minister of Police, Bheki Cele, contradicted the Health Minister, Zweli Mkhize’s earlier statements that the public would be permitted to walk their dogs or go jogging during the three-week lockdown.

It appears the Health Minister’s earlier statement, in a SABC interview that dog walking will be allowed, was not a stringent enough measure for President Cyril Ramaphosa’s lockdown protocol according to Cele and has subsequently been amended.

“We agreed that it does not enhance the call by the president to limit movement.

If you want to walk your dog, walk it around your house but not beyond that,” stated Cele.

Cele re-emphasised that under no circumstances would any religious, cultural, recreational, sporting, entertainment or exhibition establishment be allowed to operate including bars, restaurants, taverns, and shebeens.

No persons will be permitted to purchase any alcohol during the lockdown period. The transportation of alcohol will also not be permitted from different locations; it can only be consumed at home.

“In KwaZulu Natal (KZN), two people, who were charged with attempted murder, deliberately moved around after they were told not to.

“It is not a fairy tale to say the law will not act harshly against you,” he warned.

Mapisa-Nqakula refuted claims the SANDF had already been deployed. “You have not seen the deployment of the SANDF yet, it is only movement from Point A to Point B.”

The SANDF will be assisting with roadblocks and foot patrols.

Motsoaledi indicated the department will only operate with a skeleton staff focusing on providing three essential services; the issuing of temporary IDs, replacement of birth certificates and death certificates.

He expressed concern around the dissemination of fake news by highlighting a recent article on social media that alleged Chinese or Japanese citizens were bribing Home Affairs officials at the Mozambican border to be allowed entry to South Africa but investigations into these allegations were proved to be false.

He added that in his view fake news could be as dangerous as the coronavirus itself and he vowed to bring the three people implicated in this, to justice.

During the 21-day lockdown, only the transport of essential goods and staff will be permitted to use public transport.

All rail operations have been suspended, including the Gautrain. Ships and planes will only be able to deliver essential goods and those from high-risk countries will need to be disinfected.

Taxis, buses and e-hailing services will only be allowed to transport essential staff from 5am to 9am and 4pm and 8pm.

The vehicles will need to be disinfected after each trip and will have to carry fewer passengers to allow for social distancing.