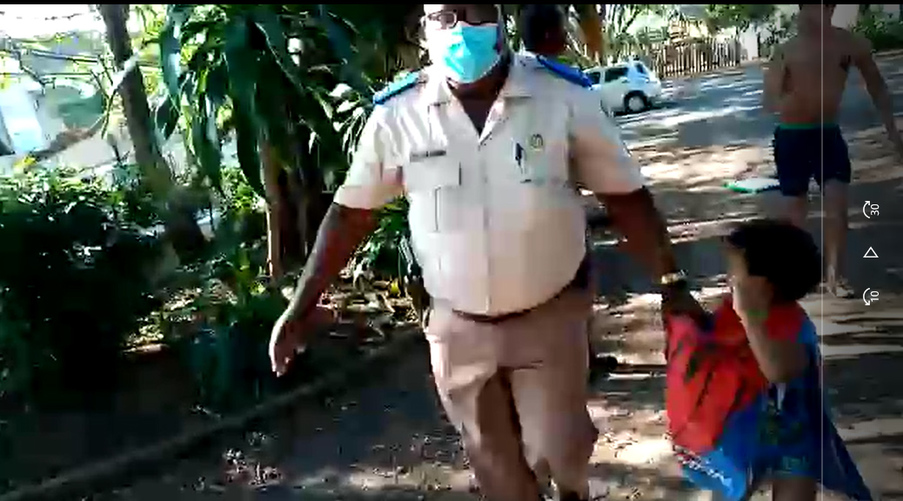 KwaDukuza peace officers videoed manhandling a four-year-old toddler before arresting the father and 10 other people for alleged lockdown infringement on Sunday morning, could face charges of assault if they are found to have overstepped the law.

The video has received widespread coverage on national media, amid furious condemnation of the behaviour of the arresting officers.

Footage shot on Sunday morning shows KDM officers arriving at a residential complex in Chaka’s Rock to arrest several families for allegedly visiting the beach – which is currently banned under lockdown regulations.

The video shows two officers entering the gates of Chaka’s Cove and grabbing a four-year-old boy who was walking into the complex.

The officer is seen lifting the screaming toddler into the air and dragging him back towards the gate.

A man later identified as the boy’s father runs up, grabs the boy and demands they release him.

“Get your hands off this child. Somebody call the police,” shouts the man, who is wearing only board shorts.

Both officers then grab the man and hustle him to the gate, letting go of the screaming child. They then handcuff the father with zip-ties and lead him outside to a waiting police car

The boy’s cries of “Dad, dad, no daddy, no daddy,” are heard in the background.

Speaking on Monday, friends of the 37-year-old father of the boy said the officers had been called to the area by lifeguards in response to a complaint laid by a resident that several families had been seen on Chaka’s Rock beach at around 7.30am.

The families, with their children, were already walking home and some had entered the complex when about 10 officers arrived.

Eleven people were arrested, including an 88-year-old man and his 81-year-old wife, who were allegedly also taking a walk along the beach.

One of the arrested men said the elderly couple, who have been walking along that same patch of beach for the past 20 years, were taken with the rest of them to Umhlali SAPS and placed in the holding cells for almost seven hours before being released on R1 000 bail.

“The elderly couple did not have money for bail so we all pitched in to assist them with the amount. It is shocking that at their frail age they were handled this way and arrested,” one father told the Courier.

One of the group said they had believed that the ban extended to prohibiting swimming, not walking on the beach.

However, Ballito attorney Jonathan De Wet told the Courier that because no crime had been committed in front of the officers, they could be charged with unlawful arrest.

“There are several procedures the police must follow before they can make a legal arrest so that the rights of the public remain protected. There are only a very limited number of circumstances in which an officer can make an arrest. According to the Criminal Procedure Act, the officers must have observed a crime, unless it was a Schedule One crime such as sexual assault or murder. If they suspect a crime has been committed then they need to get witness statements and approach the court for an arrest warrant issued by a judge,” said De Wet.

“An officer cannot arrest someone just because he feels like it or has a vague hunch that someone committed a crime. Police officers have to be able to justify their arrest usually by showing some tangible evidence that led them to probable cause.”

Another member of the group said the way the arrests had been made were unacceptable.

“Not all of them were wearing masks or gloves. The women were held in a separate cell to the men and because the cells were so small, three metres by two metres, none of us could observe social distancing,” said the Salt Rock father who also had his young daughter with him at the time of his arrest.

“We don’t condemn the regulations, but the way they handled the situation was unacceptable. They crossed a line by behaving the way they did in front of our children,” he said.

However, the municipality has denied that the officers behaved improperly or manhandled the child.

KDM spokesperson Sipho Mkhize said the matter had been investigated and it was found that the officers had received a complaint of non-adherence to the Disaster Management Act regulating Covid-19.

“It was around 8.45am when the officers arrived at the Chaka’s Rock tidal beach and observed people on the beach, which is prohibited during lockdown Level 4. Officers informed them of their transgressions and their rights and 11 people were arrested,” said Mkhize.

According to the report there were seven children present when the officers were effecting arrests.

Mkhize said four of the children had been handed over correctly and safely to their homes.

“The other three children were being processed to be handed over to their homes safely at the same premises as seen on the video, when this incident happened,” he said.

“Furthermore, the man causing the drama by running away to avoid arrest is an employee of the health department at Chief Albert Luthuli Hospital. The child was handled in terms of the Child Act, which requires for them to be taken to their home safely after arrest of the father. It is the officers’ responsibility to secure and safely keep and handle the child in cases of arrest by taking the child to a safe place, which was the case with these officers not manhandling the child,” said Mkhize.

However, late Tuesday the KZN Premier’s office said they wanted an investigation.

Umhlali SAPS confirmed 11 arrests had been made and the 11 had been charged with contravention of the Disaster Management Act regulations.

The level four lockdown restriction allow people to walk, cycle and run between 6am and 9am, within a 5km radius from their homes. Beaches and parks, however, remain closed.

All accused are scheduled to appear in court on August 10.