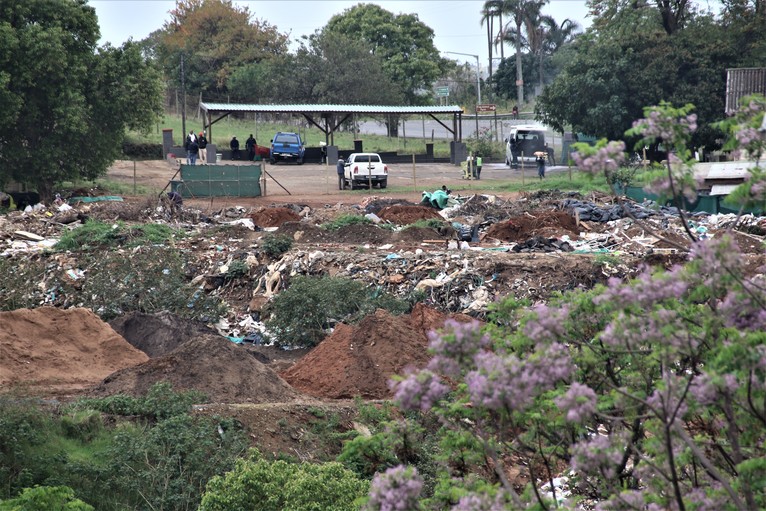 In the face of inaction by the relevant authorities a KDM ward councillor has been accused of operating an unlicensed waste site in Shakaskraal that may be endangering the health of the community.

Residents have told the Courier that the economic development, tourism and environmental affairs (EDTEA) department – responsible for compliance, monitoring and enforcement – had done nothing to stop the illegal activity.

Dolphin Coast Conservancy chairperson and member of the KwaDukuza landfill committee, Di Jones said unlike regulated sanitary landfills which work to protect the surrounding area from contaminants, illegal waste sites did not have built-in systems and lack the necessary monitoring to ensure environmental safety.

Landfill sites are required to be well lined and walled to prevent leakage into the nearby ground water sources. Certain types of wastes, even at very low quantities, may have serious implications for public health and the environment.

“For a landfill to operate without harming the environment, it has to be registered with the authorities and a permit obtained in order for it to operate,” said Jones.

Residents and persons working in the industry, who asked not to be named for fear of reprisal, said Ward 28 councillor Dooshiee Govender had been running the operation for a number of years and appeared to be well supported, as seen from the number of trucks entering and leaving the site.

He said he was aware of the illegal operation and would be looking into the matter with his ward committee members.

Ward 22 councillor Privi Makhan said she was aware of the illegal operation and had reported it on June 19, but to date has not received any feedback from the authorities.

“Recent complaints around unpleasant odors have cast a spotlight on illegal landfills and dumping in the greater area. While affected residents continue to submit their data through a collective reporting platform, we have yet to receive feedback from the relevant officials in respect of any urgent investigative processes that need to unfold,” said Cllr Makhan.

KwaDukuza municipal spokesperson, Sipho Mkhize said the municipality had reported the illegal waste site to the EDTEA but they had had no response.

A second waste site nearby is operated by resident Quinton Gilbert, who told the Courier he had applied for a permit from EDTEA.

He claimed the 5 hectare site, which was previously a farm owned by his parents, processed only building rubble and garden refuse.

Jones warned that contamination of the surrounding ground water occurred because of the leachates which seep into an unlined site.

Leachate is the noxious liquid which occurs when waste is left for any period of time.

As an example, the New Guelderland site – the only legal landfill in KwaDukuza – has a lining which has 13 non-permeable layers.

“In an unmonitored, unregulated situation, runoff from hazardous waste can work its way into streams, rivers and even into drinking water. The Shakaskraal landfill is close to the Umhlali River, which is a major cause for concern,” said Jones.

“Without trained staff on site to identify and manage the untreated waste, whether hazardous or non-hazardous, the waste is left to fester and poses multiple hazards to people, whether it ends up in the ground or in the air.”
Jones said the pollution would also affect air quality.

“Wind-borne pollution can spread far and wide and affect areas a long way from the site. We have also been informed that burning occurs during the night to reduce volumes, however, there is no obvious proof of this, other than ash outfall in surrounding areas which presents differently from cane burning. The odor is also more acrid and non-organic.”

Perpetrators, ranging from small businesses to individuals, use illegal landfills to avoid paying standard waste disposal fees. Many of the smaller rubble removers use the illegal sites because they charge substantially less than the only registered transfer station – Dolphin Coast Waste Management (DCWM).

“We have appealed to people having loads removed to request the rubble remover provide a receipt showing the rubble has been offloaded at a legitimate operation. If we, as consumers, do not take responsibility for the waste we generate ‘from cradle to grave’ we are actually encouraging wrong-doing.”

The North Coast Air Pollution Facebook group, set up earlier this year by Dolphin Coast residents have raised concerns about the quality of air in the region.

The groups administrator Warren Erasmus said: “There are contributors to the air problem who are abiding by environmental law to the best of their ability and there are others who flagrantly disregard any consequences of illegal burning and dumping of hazardous substances that not only affect everyone’s right to clean air, but that also potentially threaten the water table that sustains coastal life.”

Mkhize said the municipality had issued fines and closed some illegal dumping sites, only to see them reappear elsewhere.

“The constant mushrooming of these sites has seen to be unstoppable. The municipality currently awaits information from EDTEA – as they should be in the right position to advise as to what they have done on the matter since it was reported by the municipality.”

“It is unfortunate that we have repeat offenders who have been caught several times and fined, pay the fine, but are still continuing with dumping illegally,” said Mkhize.

He said the municipality would create a database of the type of waste being dumped and skip loader hire businesses in order to isolate the perpetrators.

The EDTEA did not respond to requests for comment.