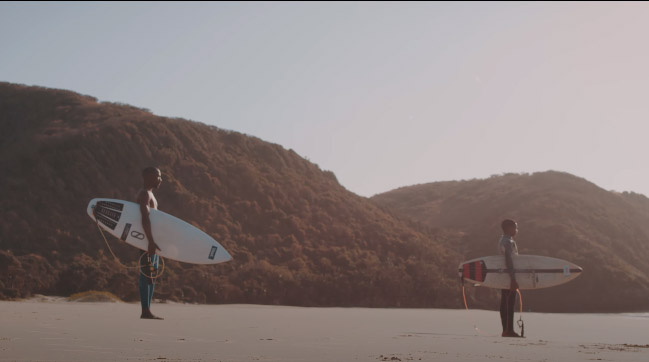 Based on a true story, Simbithi resident Tim Hay of Hellmot Productions has retold the tragic tale of how Port St Johns resident Avuyile ‘Avo’ Ndamase lost his brother, Zama, to a fatal shark attack.

The short film, titled ‘Amanzi Olwande’ shot in 8K has been entered into the international short film competition, My Røde Reel 2020 in the category drama.

With the possibility of winning a cash prize of $1 million, Hay says competition is stiff but that he loves working on projects such as this owing to his love of film and creating something worthwhile.

“I was inspired by ‘Avo’s’ story. He was there that day when he lost his brother to a fatal shark attack in his home town,” says Hay.

The role of the two younger versions of the Ndamase brothers are played by two young surfers from Salt Rock, Sanele Mthethwa and Mpathi Ndlovu.

Crammed into a trailer, armed with surfboards, abled bodies and film gear, the crew of six set out to the Transkei for three days to capture the footage needed to piece together the riveting short film.

‘Amanzi Olwande’, meaning Ocean Water, is sure to be a contender for the prize in My Røde Reel 2020.

But to win Tim needs the public’s vote.

For a behind the scenes look into the production of this film, watch the video below.

Full crew of the short film was made up of:

Adult Avo: As himself