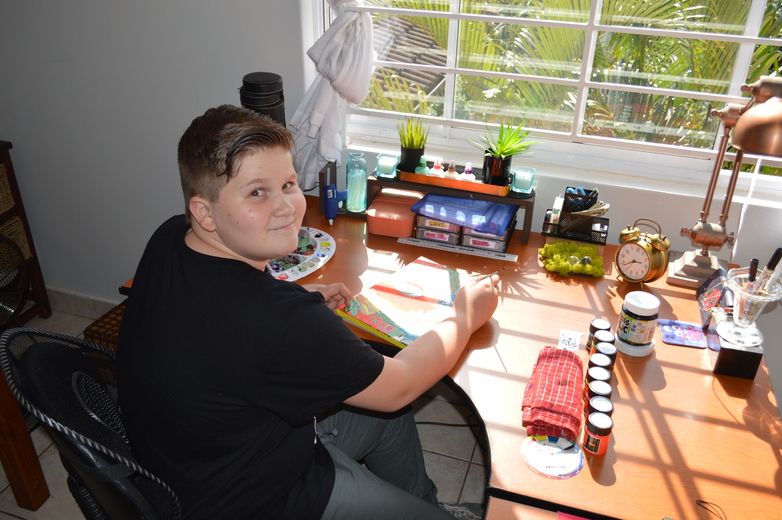 After being diagnosed at the age of 6, Clayden has struggled with social interaction and traditional schooling but has now found a niche for his talents.

“I have been drawing for a long time, making art for my friends when I was 4 and ever since,” he said.

There has however been a massive improvement in his skill level during lockdown, with more time at home to draw, said his mother Antoinette.

He had mainly been drawing with marker pens, but has since experimented with paint and acrylics and is now able to realise his characters on much larger canvases.

“I used to get ideas from YouTube and Instagram, and pick and choose what I liked, but I now feel confident enough to use my imagination only,” said Clayden.

He has been spending hours at a time sketching and perfecting his abilities, and the practice has paid dividends.

“People want to put labels on kids who have autism, but it is actually a gift,” he said.

The family is focusing on highlighting the positive aspects of Clayden’s diagnosis, and they are mindful that he may become an example for others similarly diagnosed.

Clayden does still have difficulties and cannot read or write, but is considered to be high functioning on the autism spectrum.

“I have tried to focus on teaching him actual life skills and he is already becoming a productive member of society. The drawing helps him to manage his emotions, and we hope one day that it will be a career for him,” said Antoinette.

He has already started doing commissions, and has been asked to do the illustrations for an upcoming children’s book.

One day he hopes to study digital animation and from there the possibilities are endless.

He posts regularly on his Facebook page and has recently started a YouTube channel to spread his message and his art.

You can also find his designs on t-shirts and other clothing items via his website at claydensdesigns.com.