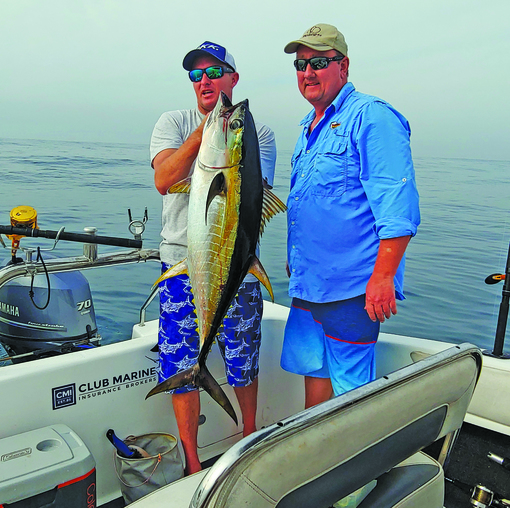 After the cold front had moved through with the rain that it had brought, dirty river water was pouring out to sea resulting in brownish ocean water as far as the eye could see on Monday morning.

The ocean was very bumpy and unsettled. North easterly winds persisted until Friday morning where there was a light south westerly, bringing wet conditions again for the weekend.

Shad season is closed from now until the end of November, but it seems many anglers are not worried about this.

It appears to be business as usual.

A colleague phoned me mid-week and said he was down at Glenashley beach, where all the parking had been taken by cars from Stanger, Durban, Umhlanga Rocks and Ballito.

He saw that there was no chance of him attempting to throw a spoon, so he sat on the bank and watch the crowd fishing.

At first light the fish came on the bite and he could see anglers ‘knocking’ the shad with none being returned to the water.

Nobody was attempting to hide the fact that they were targeting shad or sticking to bag limits.

If this was happening at one particular beach, how many beaches are seeing shad being caught in large numbers every day?

It has been another phenomenal year again for copper bream and most anglers have caught their fair share.

The bronzies are on the bite along north and south coast beaches with fresh prawn being the preferred bait.

So there has been plenty for all.

The rough surf conditions have proved to be ideal for the guys fishing amongst the bricks and during the week I saw one angler leaving the beach with two nice spade fish.

Anglers fishing the Durban beachfront areas have been catching a number of blue rays plus one or two lesser sand sharks, showing the beginning of the summer fishing period.

Most have been caught in the dark and others caught have been grunter and shoal kob plus snapper salmon.

Off-shore anglers fishing backline have caught a number of garrick but big shad have been nailing the live baits.

Sea conditions were not in favour of the off-shore anglers last week, especially those wanting to target the bottom fish.

I did see a couple of guys fishing the backline for garrick and I believe they will be back targeting yellowfin tuna and dorado.

A surf ski angler trolling a live mackerel along the backline in the Glenashley area landed a big queenfish.

Up north, plenty of snapper salmon and kob have been landed from the mixed water of the Tugela mouth.

Some big skates and sandies that have really stretched the anglers’ arms.

Even though it was really windy up north at times last week, the fishing seems to have been really productive and a few big grunter were caught at night.