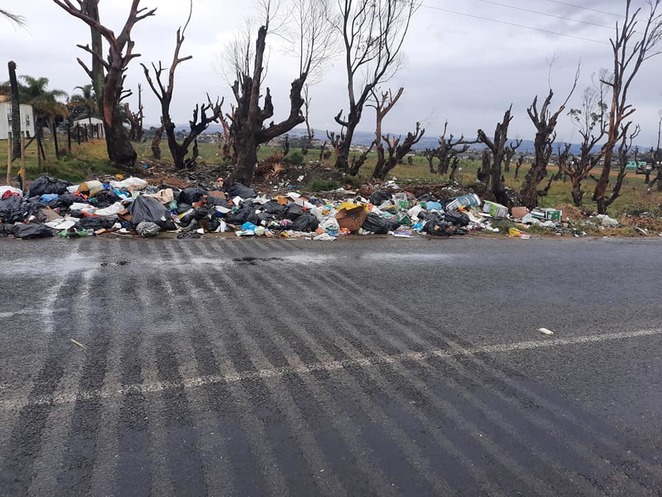 Illegal dumping seems to be growing at a rapid rate and it is no longer uncommon to see huge piles of waste dumped by the roadside, on vacant plots in neighborhoods or non-designated waste sites throughout the region.

In many low-income communities, residents live amidst growing mountains of urban waste while open areas have become dumping grounds for commercial waste.

While existing bylaws prohibit the dumping of rubble and other waste a renewed and integrated approach to clamp down on those who illegally litter and dump waste in public open spaces is needed.

This is according to KwaDukuza spokesperson Sipho Mkhize who said that penalty fines must be increased and current bylaws need to be reviewed to allow impounding of vehicles used in illegal dumping.

“The municipality believes these two amendments will go a long way in deterring illegal dumpers from committing these horrendous acts.”

Instead of following the right channels for disposing waste or paying third party waste pick up services, they illegally dispose the waste in remote locations.

Some third party waste pick up services have also gotten into the habit of dumping waste on illegal dumpsites to avoid paying the disposal fees.

Common areas for illegal dumping include vacant or poorly lit property, rural roads, alleys and even on the side of roads. And, to compound the problem, dumped materials often attract more dumping.

“Although illegal dumping has been a problem for a long time, the municipality has observed it become more prevalent during the lockdown as we did not have a full complement of staff, therefore our ability to monitor and issue fines against perpetrators was hampered,” said Mkhize.

In a video taken on August 17, seen by the Courier, local company Dolphin Coast Movers is captured dumping rubbish near the entrance of Shaka’s Head.

According to witnesses it is not the first time that the company has dumped at this location.

“They were here some weeks ago, and they came for a second time after I took the video,” said Shaka’s Head resident Sne.

The area, where Sne’s kids play soccer every afternoon, has become a popular site for illegal dumping for many companies trying to shirk regulations. Dolphin Coast Movers is just a drop in the ocean, she says.

“They come here most days in the afternoon, lots of different companies.”

The area is easily accessible for trucks, and has little oversight because it is well hidden from the busy Ballito Drive, says Sne.

The vehicles can simply reverse onto the fields, dump the waste and be on their way without having to pay the fees of a typical dumping site.

Aside from the eyesore aspect, much of the waste contains broken glass and other sharp objects which can be dangerous for the inquisitive children when they play on the fields,

“The children are digging in the piles and finding lots of things that can hurt them,” she says.

Although the Courier made efforts to contact the company, they provided no comment on the issue after acknowledging receipt of the video.

However, Mkhize said communities had a critical role to play to put an end to illegal dumping

“Communities can assist by identifying those responsible for illegally dumping in their neighborhoods. One of the easiest things to do is to take a picture of the perpetrators as well as the registration of the vehicle used to commit the offense. Private landowner also have a responsibility to ensure no illegal dumping occurs on their properties. Media can also play a role by naming and shaming the perpetrators in their local publications. In the instances where illegal dumping is reported to the municipality we will definitely act on it by tracking the perpetrator and ensuring they clean up their waste and further issue fines.”

Mkhize urged the communities to become vigilant as continued dumping will cause various environmental and social impacts, which hinder improvement in sustainable development.

“This problem could see investment within the municipality being taken elsewhere as there is no business or development that would want to be part of an aesthetically unpleasing environment. To find the times for pick up in your area call Dolphin Coast Waste Management at 032 947 2979. To report illegal dumping call KDM’s waste management office at 032 437 5091.