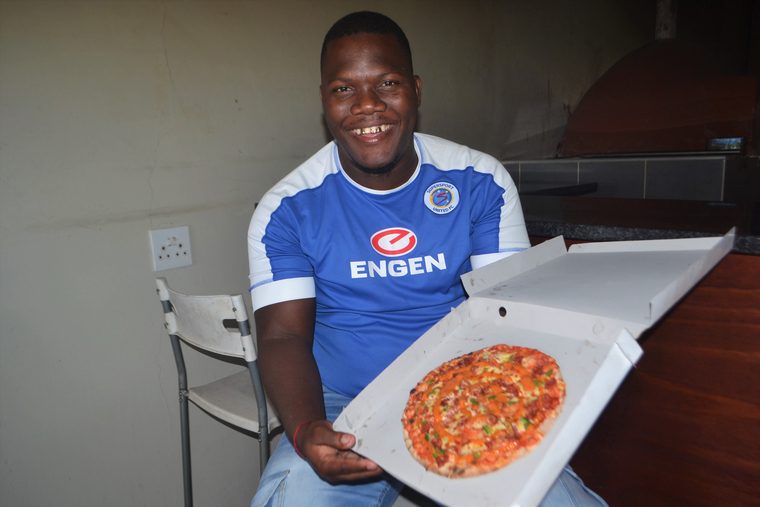 After losing his job at Gianni’s Ristorante due to the coronavirus pandemic 2 months ago, Qiniso Gumude launched a pizza and shisanyama business that has become a hit in Groutville.

He recently opened Runner’s Eat Local in Thembeni which is already the talk of the township – and the name has a story!

Qiniso previously owned a similar business in a container in Groutville and Etete, but had to close after he was robbed several times.

He went back to work as a waiter in Ballito while looking for another opportunity.

“After Gianni’s closed I had to look for something that I knew best and I realised that it was giving the township pizzas. So far business has been doing well and I am grateful for the support I am getting from the residents around KwaDukuza.”

Raised by his Gogo in the remote rural area of Nyangane outside KwaDukuza while his father was in prison and his mother worked in Groutville, Qiniso always wanted to own his own business.

“My Gogo taught me to accept every situation that I may find myself in and if I do not have something, I must work to get it.”

When he was in school, unlike other pupils who were thinking about how to avoid homework, Qiniso always knew that he had to learn in order to run his own business.

“It all started when my mother, Nana Gumede, bought me a cell phone (Samsung E250) which was very expensive and fancy at the time. Instead of carrying it around and showing off, I traded it in for a camera and I started making money as a photographer at school,” said Gumede.

Every cent he earned was put towards his dream.

But when his mother died in 2010, he was forced to put his dream on hold to put bread on the table.

“I had to find a job because the money I made from my photography business was not enough to live on. So I found a job at a Ballito restaurant.”

That is where he got the nickname “Runner”, as waiters-in-training are called ‘runners’ and he was the best runner his boss had ever seen.

Now he is back in business and, with a little good luck, he is on his way to better things.